March 8, 2021 is the 15th anniversary of Portal International IPR Group. Our group held a “Thanksgiving tea party for PIIP’s 15th anniversary” in the afternoon at Taipei office. 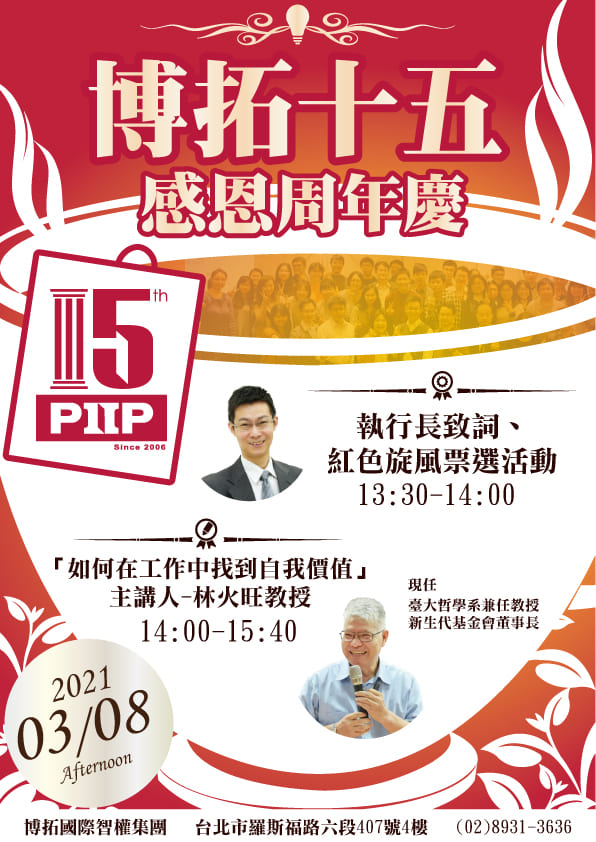 At the beginning, Mr. Daniel Y.C. Lee, the CEO of our PIIP Group, played the role of the God of wealth and sent candy to the colleagues, hoping that everyone would get good luck. Next, an activity “voting for red whirlwind” was held. The red highlights (decorations) on the workmates represented the classic color of PIIP Group. And we let the colleagues vote for the one who has the most creative getup will win the prize!

During the intermission, under the leadership of Chief Executive Officer, Mr. Daniel Y.C. Lee retrospected the major milestones and future prospects of PIIP Group in the past 15 years. In the past 15 years, in addition to accumulating a lot of practical experiences, PIIP Group has become an all-round IP team that is difficult to be replaced in Greater China region due to everyone’s dedication, service to clients and professional persistence and quality. And our corporate value system also insists on “Taken from society, give back to society”. The annual charity activities have become the tradition of PIIP Group which enable us always kept benevolent of others and last forever.

And many examples are put forward to make us understand that “happiness is closely related to morality”, and that only you can decide your own happiness.

In fact, the values that Professor Lin teaches coincide with the core values of PIIP Group. No matter in work or in the various activities, we expect every colleague of PIIP Group to stick to professional ethics and have a good conscience, not only bring good atmosphere for individuals but also society. We also look forward to advance our professional and to push ourselves with the service and cooperate together to create a new peak of PIIP Group.